trip to the farm

My human's father had a birthday [a couple weeks ago], so we went to go see him. Since there are a lott more buggers at the farm, he got an order of my flea medisine at his vet. But I wasn't sleeping calmly enough for him to put it on me before we left.

He didn,t bring it with us. About an hour into the trip, he pullled off the highway to look for it. He called his father, who called the vet their cats go to; they didn't have it. It's a prescription medicine, so the vet would have to see mie first, anyway.

So then he called the vet at the pet store where we ususually stop for lunch. They had it, but we would have to wait until 3:15 for an apppointment, and we would probably get there about 2:30, and he didn't want to wait if he didn't have to. He called the vet where they had seen me the day I left the farm (because he had their number in his phone), and they could see me at 4:00, but we migh tnot be able to get there before 4:30. He called a couple of other vets at the petstores. They couldn't do much better on the scheduling. So we made an appointment at 3:15 at the petstore by where he eats lunch.

We got there, and it was raining. He ate his lunch, and we went in to the petstore and bought what we needed. But it was still only 2:40 -- wait 35 minutes there, or make an appointment and run 90 miles down the highway in 80 minutes in the rain? We tried for the apppointment closer to the farm. About halfway there, he noticed I didn't have my seatbelt on, so he pulled off to the exit ramp and spent about 5 minutes getting me buckeled in. This carrier fit better in the other, bigger car, but that car had other problems.

At 4:00, he called the vet and said we were still about a half hour away. We got to the vet at about 4:25. There was a dog waiting for an appointment, and an exotic birdie in a cage who lives there. The lady behind the desk asked if they had seen me. Weell, yess, but it had been 4½ years. But they still found my file, so I didn't have to go see the doctor, and he only had to pay for my medicine and not an apppointment.

We went down the road home, and were there at a nice time. The human's dinner was not ready, but he fed me and set up my litter box and water. I used the box.

He gave me my medicine, but spilled a little on his hands, so he then washed it offf right away.

He also got to see my mother Smudge for a little bit while he was on the farm.

The next night, there were other people here. He let me out to see them. One of them I'm pretty sure I've never seen, at least not up that close. The other one I might have seen when I still lived on the farm.

After the second night, he packed up and we went home. We stopped so he could use the restroom at the petstore but didn't stop to eat. About a half mile from home, we had to stop for a freightrain. He started singing with the radio, and so did I. He liked the song better than I liked his singing. Once I got inside, the next thing he did was get out my bowl and feed me

Then he unloaded the car. 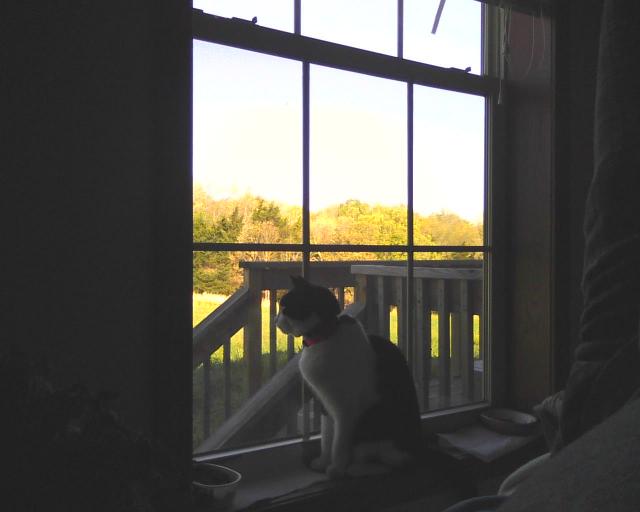 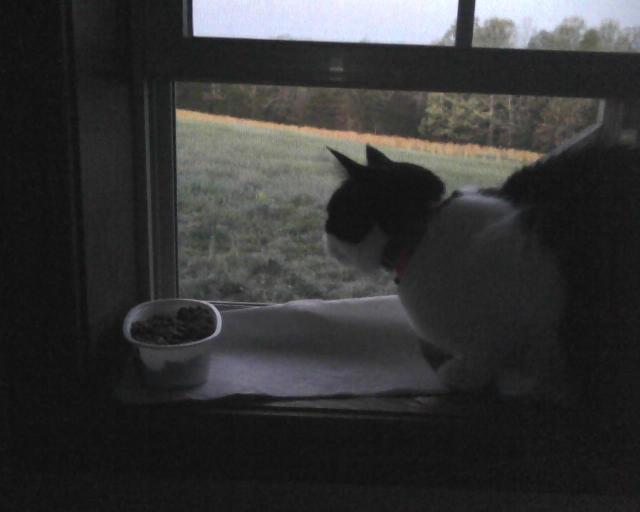 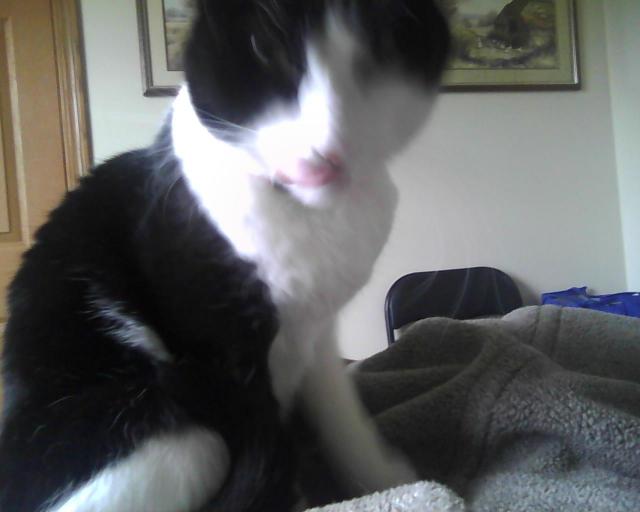 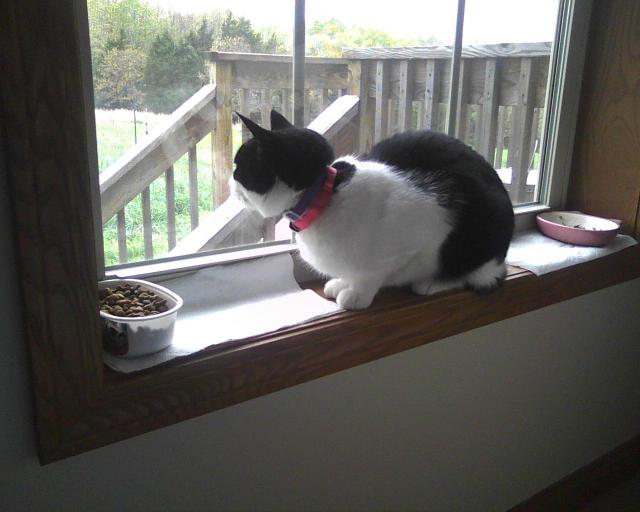 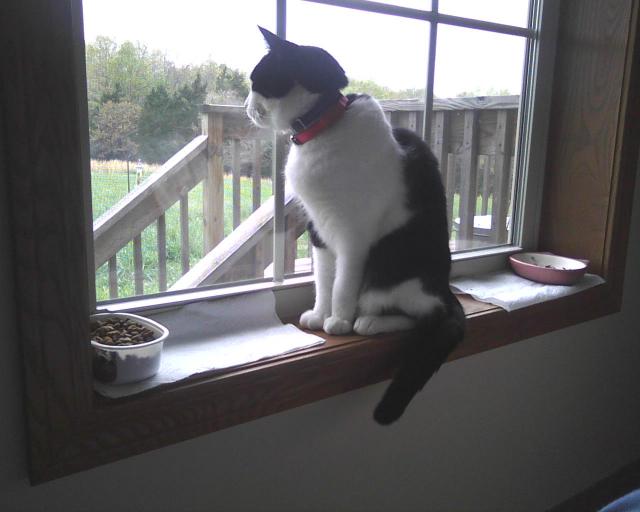 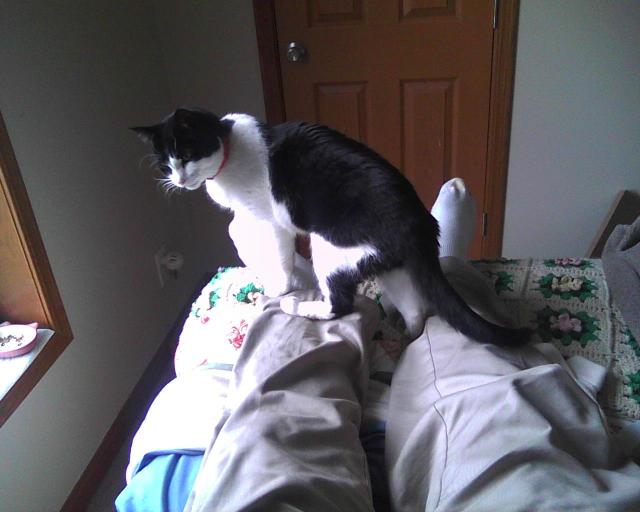 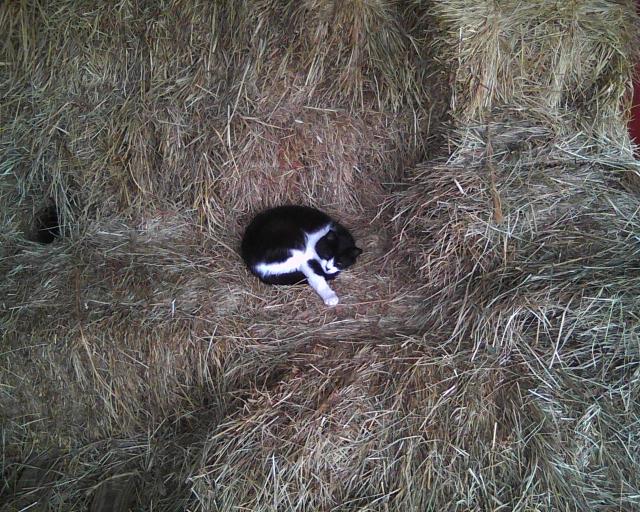 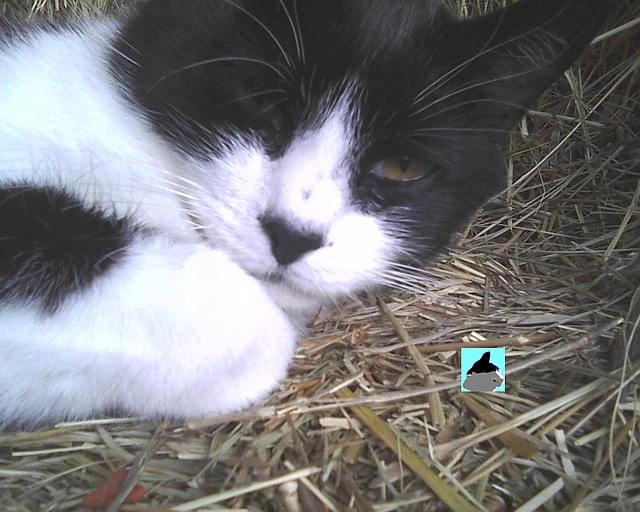