May is Pet Cancer Awareness month. Many of our Furrends have Crossed the Bridge from Cancer. Sweetie, Noodles, Poptart, Jynx. Now out Furrend Ursula From Franklin and Butters may have it and they think it is in her bones.
The three most common types of cancer in Kitties are:
Lymphoma, Leukemia, and Mammary (breast )
Lymphoma covers;Intestines
Nasal cavity
Lymph nodes
Kidneys
Liver

The most Important story to tell you about of course is Big Brofur Anubis. He had Cancer in him's Nose. It came on rather quickly. Mom noticed a bump on his nose on Friday and took him to the emergency hospital on Saturday because it had grown so large!! He was breathing okay and they had thought cancer but she wanted to check with The Man who Tastes like Chicken. They gave her some morphine for Anubis.

When she took him in on Monday in had grown even bigger and the Man who Tastes like Chicken said "yes it's Cancer". And it's in his mouth, nose and eye. His nose looked like he had been in a boxing match mom said!!

They said they might be wrong, and could try some steroids but mom knew they were right but wasn't ready yet to let him go. So she went home with Anubis, and steroids, and Morphine. While they were there mom had seen a lady with 3 little kittens and she thought, "oh how cute they are!!!'

By Wednesday Brofur Anubis was very sick, he just wanted to be held and sleep and his nose REALLY looked like he had been in a boxing match. So mom said it was time and she took him back to the Man who Tastes like Chicken and the helped him not be in pain any more.

And two days later Grandma found a lady who had baby Kittens and guess what!! It was the lady from the vet and I was that Kitten!!!
This is my Big Brofur Anubis in case you didn't know him!! 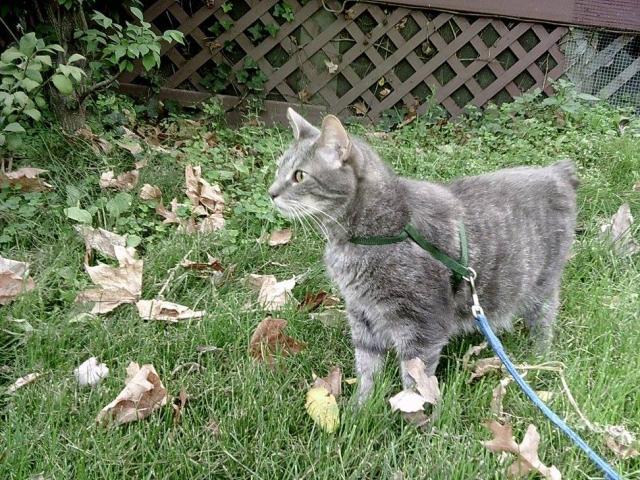 They say that one way to help prevent mammary cancer in kitties is to get spayed before the first litter of kittens. I was spayed before I had kittens, but Truffles may have tried to give me some a little bit before it happened. (He was fixed on the same day I was.) And if they have to do a mastectomy, it takes out all of the nipples on the one side.

Jewel was a long-haired calico who lived at the pet supplies shop where our human often buys things for Parker. She wasn't there when he last went in, and the owner was bracing the door open. He asked about her, and the man said that her Feline Leukemia had spread to the bone marrow back in February. It was only about a week or two after that until it was too much for her.

Wow, such a terrible thing, I didn't know the whole story of Anubis. RIP buddy