back to the farm

We went back to the farm for Thanxgiving.

Well, the weekend anyway. Thursday we spent most of in bed or doing not much around the house. Then he made some turkey and potatoes and ate it. Friday he packed everything up and we got in the car. I was singing a lot. He thanked me for calming down, and I started meowing again. We stoppped at the PetSmart and picked up some foood for me after he had had his lunch. Most of the crack-of-dawn black friday shoppers (The early cat gets the little bird while mama bird is off getting the worm!) had gone home by then, and there was a foobball game on that we listened to in the car. Then we stopped at a vet and he picked up a little something for me to fight fleas. I didn't much like it when he gave it to me on Saturday.

We got to the farm, and the dog was there to greet us. My human reminded the dog, "No cats" as he carried my carrier in. Then he let me out in the bedroom after setting up my littter box, food, and water.

We slept late on Caturday, and he gave me some food. He also let me explore the house a little. My sister Midge didn't like it that I was there. She hissed at me and I ran back to the bedroom where we were staying. I threw up a couple of times after I ate the food. Maybe the food got too hot in the car. Maybe I was just nervous.

I did get to look out a sunny window. And he brought his comforter so I had something that smelled right to sleep on.

Then my human packed everything up again, and we got in the car. I didn't like that, and I told him about it. He didn't appreciate my singinignign, but he did listen to some foobball games on the radio. We stopped at PetSmart again. He didn't get anything to eat. Then, when he got home, he changed my kitty litter, but the new stuff was still in the car, so I didn't have much to work with. 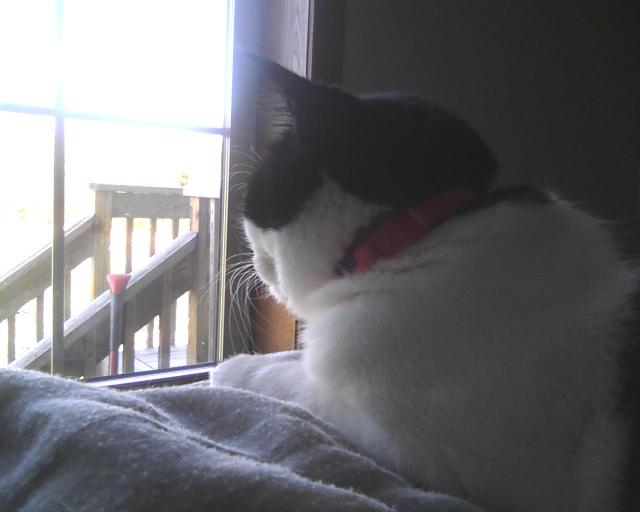 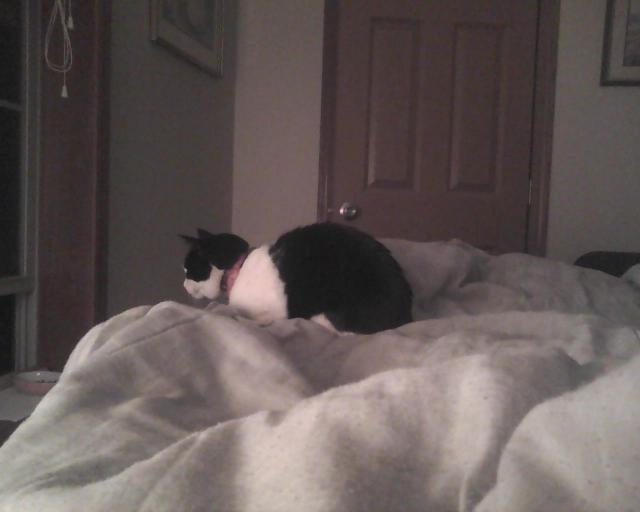