E is for eating .

I like to eat. As Garfield once put it, if I couldn't eat, I'd just die.

But I don't eat as much as Garfield does.

When I was a kitten in the shed, they fed me kitten chow. Then they changed to the low-priced food. Then the next kitten season came, and I had some of their kitten chow. Of course, mama Smudge was a feral cat, so she taught us how to hunt. She would bring back a mouse, and I would take it and growl at anykitty who tried to take it from me. They fed us dry food once or twice a day, and we were expected to keep the barn free of mice. Butler will talk more about hunting later.

They came to feed us once or twice a day; usually, dinner was more food from the humans than breakfast was. He also sat with us to get us to trust him. When I left the shed because of the kittens, He made sure I still got my food. One day, he showed me that he would be feeding me over by the hay, because they couldn't go to the shed anymore. Sometimes he fed me on his lap.

When I became an inside cat, my eating schedule changed, sorta. About the times he used to feed me dry food, he fed me canned food. I started out with indoor formula. Eventually, he changed to the regular formula. The last time he got me a can of the indoor formula after a long break I could not keep it down.

I don't eat tooo much. Maybe because he feeds me canned food, I am satisfied with less and don't have to eat all day long. Maybe because I got enough exercise as a kitten, I don't just keep eating till I get fat. I eat about half a 5-oz. can a day, spread across two meals, with dry food available all day (usually), and some treats, usually in the evening before bed, but sometimes if I need help finishing my dinner. If he has ice cream, he'll usually give me a spoonful to keep me from bothering him. I only get the natural vanilla flavor, but he has some other flavors sometimes.

I am sortof a picky eater. He is allergic to shrimp, so that flavor is not an option. I don't like seafood (especially seafood pâté). I don't like the other pâté much, either. I prefer the chicken flavor, but I'll also eat some mixed flavors, like chicken and turkey or chicken and tuna. I also like cheese, if it's little cheese chunks, a cheesy sauce, or the macaroni and cheese he spills from his plate when he eats it

. There was one time I still lived in the shed and I was late for dinner. He had had pizza before I had my dinner. He came out to see me and picked me up. I licked his face to clean up the tasty pizza

. But I'm not usually big on new flavors. For my birthday, he usually gets me a duck and turkey flavor dinner from a diffferent company. One year, he couldn't find that so early, so he tried a duck pâté with peas. I took one sniff at that, then I looked up at him to ask « Where's breakfast ? » Fortunately, he found the good duck-and-chicken food at a farm / feed store and I had that instead.

I have some really cute bowls for my food. I had another, but it smelled funny, so I knocked off the counter and it broke. I wrote about my old bowl before. 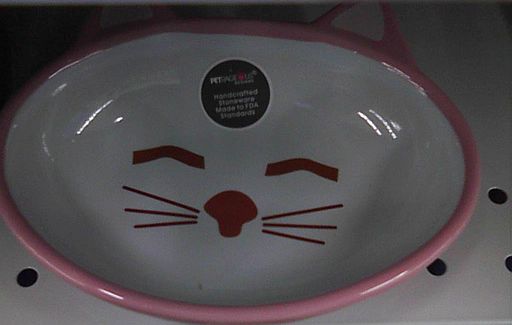 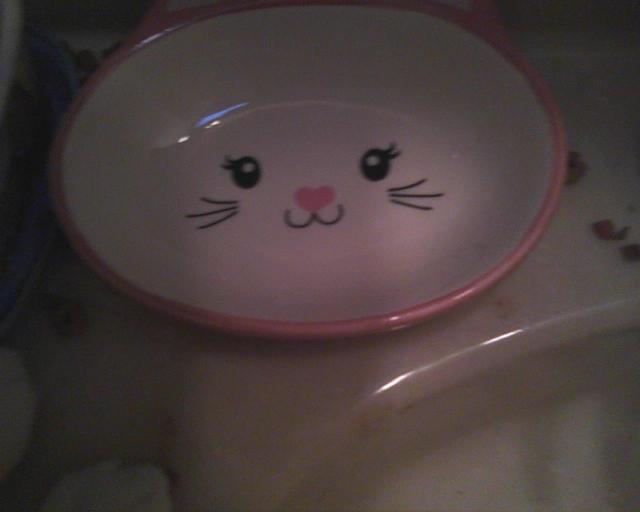 I'm a GODDESS and therefore I'm very picky!! I don't like the same flavor wet food in the evening that I had in the morning. also not the same flavor in the morning that I had the night before. And I don't like it cold so NO LEFT OVERS!!! mom buys little tiny sheba portions, but still throws a lot out because I eat very little. I also like fancy feast broths but only drink the juice but mom says that's ok because I'm not a big drinker and I get my liquid that way,

I like the kitten chow, and some times some other dry as well. some days there can be FIVE food bowls down. YES YES, mom knows she is crazy but I is a GODDESS and she worries I don't eat enough . I'm only 6 pounds you know!!!! Kitty Kisses from Seshat