L is for litterbox. The litterbox is a nice place for a cat to do that sort of thing if the cat lives inside. My human likes that he does not have to go outside for me on a cold day, and I like having a place where I don't get rained on when I do that.

When we were all in the shed, we had a litterbox that he cleaned every day; we went through about 25 lbs of litter a week, and sometimes we used the outside, as well. It got so heavy at times that the garbage man said you don't have to combine it into another bag -- we'll just take it separately and not necessarily charge for the extra ba4 I mean bag. (I helped my human type that

). Sometimes, there was some litter that spilled onto the concrete floor of the shed, and we used that litter too. When we were outside, we would dig in the dirt, or maybe in the dirt/gravel road. We always covered up, because we didn't want any mice (who we want around) or coyotes (who we don't want around) to know that we are there.

When I moved into his apartment, he had the litterbox ready for me. I readily used it early that first week, and I have gotten used to using it. I really like it when he cleans it. He uses a liner, so he can take out all the everything every week, and he usually scoops the poop every day. Sometimes he's a little late, and I have to remind him to do it. Sometimes I have to tell him that when he gets home from wherever he goes. I like using a clean litterbox. I also like it that I don't have to share with 10 other kitties

When Binx lived here, he had his own litterbox with a different kind of litter. I didn't get to see it much, as he was usually behind a closed door. 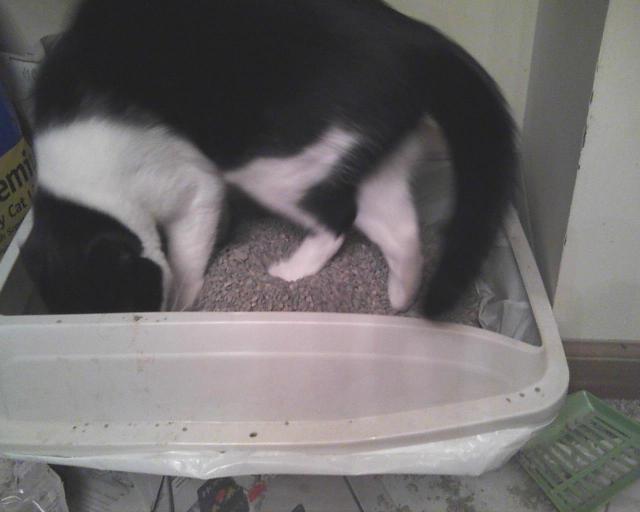 mom uses cedariffic litter,. there is no dust and it is all natural. it doesn't track threw the house. I have 2 boxes. I like to pee in one and poop in the other. They where left from my Brofurs. One is HUGE!!!!! it was Brofurs Ramses!!!! you can fit two kitties in it!! mol!!!